Looking for the Lightspeed Webstore? Click here for more information.

Today’s classrooms are full of immersive high-tech tools—but at the same time, schools and districts are being pushed to promote social-emotional learning (SEL) and improve school climate. Since spending too much time looking at various screens can hinder the direct connection between people, here are four real-world examples of tech helping students connect on a human level with their peers, their teachers, and the world around them.

When teaching the 21st-century skill of communication, many schools focus on reading and writing, but spoken communication is just as important to students’ success in school and in life. At J.M. Grasse Elementary School in Perkasie, Penn., where I am the principal, we use technology to make students more comfortable with public speaking.

The fear of public speaking affects 75 percent of our population. To help curb students’ fear of talking in front of an audience, teachers at my school use handheld microphones and the Lightspeed Redcat audio system multiple times a day to give each student the opportunity to speak and be heard by the entire class. Students use these microphones during morning meetings, when reading out loud, and when doing mini-presentations. Not only do they love speaking into the microphone, but teachers enjoy having students that are attentive and engaged.

Prior to classes using handheld microphones and the audio systems, students would speak out of turn and blurt out answers to questions, disrupting the flow of the class. Now, students who wish to speak know they’ll get a turn, but must wait until they have the microphone. On the other hand, students who used to fade into the background now have a chance to put themselves out there and confront their fear of speaking out loud.

This emphasis on public speaking also builds students’ social-emotional skills by teaching them to listen respectfully when others are talking. Exposing students to public speaking at a young age gives them confidence, and some never even develop a fear of it. By empowering students to share their thoughts, we are encouraging a positive learning environment, increasing engagement, and giving every student a voice.

Recent research has found that children with autism seem to be more comfortable interacting with robots than with humans. Children with social and language disabilities prefer robots because they are able to recognize emotions at a slower rate. Robots allow these students to engage at a comfortable processing speed and interact and engage more than with a peer or adult.

For example, Celia, a seven-year-old girl with an autism diagnosis, struggled with behavioral breakdowns (tantrums) when she couldn’t use appropriate language to make her needs known. The environment was overstimulating and, due to her sensory-processing difficulties, she could not adapt appropriately to the daily transitions in a classroom. She also suffers from depression, an inability to express her frustrations verbally, and difficulty completing age-related functional skills. Celia lacked the essential language and motor skills to keep up with her strong cognitive abilities. I began working with her in August 2015, using Milo (as part of a comprehensive treatment protocol), a humanoid robot that engages learners with autism to deliver research-based lessons demonstrating appropriate social behaviors.

Milo provides a sequenced, organized method of resetting the language processing part of the brain, regardless of the child’s cognitive ability. I introduced Milo early in her intensive program, so Celia quickly became comfortable with him. He interacted at a processing speed designed for Celia to slow down her need for control, and provided the non-judgmental, patient feedback she needed to practice these new skills—as well as the visual opportunities to follow through by using the modeling on Celia’s iPad. Celia began to ask for Milo and to rely on him to develop her own verbal and executive skills. Within two weeks, Celia generalized these activities to all areas of her life—at home, in the grocery store, and at family functions.

Milo became Celia’s sensory- and language-processing assistant whenever she needed to reorganize her social skills. Using sensory-processing tools as well as visual and auditory inputs, she gained a greater ability to perceive how to respond to the environment, which influenced her ability to understand her body in space, how to react to perceived stressors, and how to use language to make her needs known.

By May 2016, Celia showed improvements in touch processing, impulsivity, arousal, and inhibitory responses. While she continued to learn higher-level language skills, we saw a significant decrease in tantrums and improved impulse control, and her social repertoires improved. Milo provided consistent strategies that gave Celia the social tools she needed to be successful.

In my class, we self-reflect at the end of each day. Students acknowledge each other for positive behaviors like sharing or saying thank you, and they’re also able to point out their own positive behaviors during this time. I use an app called Bloomz to reward the behaviors we point out (and share them with students’ parents). This has been a very important part of socializing and building self-esteem and friendship in our class. As a group, we continuously acknowledge our behaviors and build a supportive community where accountability is the norm. When classmates know each other well and recognize what gifts each individual brings to the group, students honor each other’s differences and bullying is less likely to occur.

This activity is also helpful for my student who is on the autism spectrum. It helps him learn about personal space, how to raise a hand and wait to be called on, how to say thank you, and how to give compliments to people. The whole class is able to acknowledge his positive behaviors, and he is learning to acknowledge others positively. This is helping him socialize and build friendships. When my students’ flowers “bloom” on the app, I give them a real flower in class. It may seem like a small thing, but the impact it has on the students is huge. When my student on the autism spectrum received a flower, the whole class clapped and he came up to the front with a big smile on his face to receive it. It was a big moment for our whole classroom community.

This habit of communal self-reflection has enabled my students to keep an open mind when interacting with people different from themselves. In one classroom last year, I had a student with misophonia (sound sensitivities), another on the autism spectrum, one with obsessive-compulsive disorder, and another with Tourette Syndrome. One student’s tic was another student’s trigger. This created many opportunities for us to discuss diversity and inclusiveness within our classroom. When I saw their patience and how they came up with creative solutions to work together and create a safe space where everyone could feel comfortable and learn, I had hope for the future.

As the media specialist at David C. Barrow Elementary in Athens, Georgia, I created the annual Barrow Peace Prize project in collaboration with the second-grade classroom teachers and art teacher. This cross-curricular project allows students to consider the character traits of peace and extend their voices to a global audience. Each student selects one of six nominees from civil-rights history to research through online resources such as PebbleGo. They create a persuasive video essay via Flipgrid as well as a watercolor painting showing why their nominee best displays the qualities of peace. People from all over the world vote on the videos, and the nominee with the most votes (and the students who researched them) is awarded the Barrow Peace Prize.

I think students surprise themselves during this project. I’ve seen some who have said, “I’m not a great artist,” and then they suddenly create a beautiful watercolor image that they had no idea was hiding inside them. Other students are more introverted and don’t like sharing in front of the whole class, but by using a tool like Flipgrid they are able to speak to just the iPad. This allows their voice to be heard in a way that it might not be in the classroom. I also think students surprise themselves by the amount of work that they put into the project across several weeks. The Barrow Peace Prize pushes them to persevere through a long project.

Studying these great men and women of history helps our students think deeply about character. At the same time, they are given a chance to discover hidden character traits of their own that they didn’t even know they had. 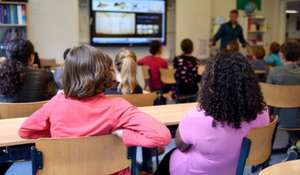 Instructional Audio: 4 Benefits to Improving It

Ensuring every classroom has instructional audio capabilities helps all students hear what the teacher is saying. Read the full article here.
Read More 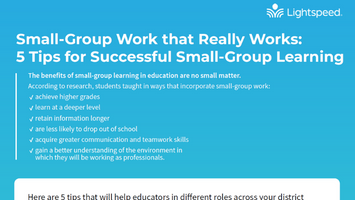 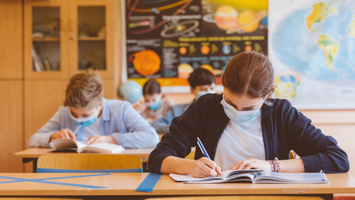