Looking for the Lightspeed Webstore? Click here for more information.

At CETPA, District Leaders Rethink the Classroom, From Furniture to Funding

by Antoinette Sui from EdSurge News

Last week, more than a thousand education technology professionals showed up on election week for the California Educational Technology Professionals Association annual conference in Sacramento to discuss all-things tech in their local districts. The conference included about 156 sessions and 24 labs, where topics ranged from data and security to how to best use smart technology in classrooms.

But the technology talk wasn’t just centered on information technology, cloud and wireless setup like in past conferences. Many district technology directors and leaders this year spoke of how they redesigned classrooms to complement the different technologies students and teachers used. Laguna Beach Unified School District CTO Michael Morrison, for instance, shared how his four-school district approached a project to create new classroom and library spaces in the last three years.

Morrison and his colleagues looked at research on everything from sitting versus standing and hued lighting and moods to clutter in classrooms and classroom audio. As a 1-to-1 district, students from second grade and up use Chromebooks and their younger classmates use iPads. Based on their surveys, one out of three students prefer standing — so they took that into account when consider furniture and room design. Different passive positions from sitting on regular chairs, students can’t lean back when sitting on stools.

Laguna Unified is also experimenting with how to amplify audio in the classroom. Their research showed teacher stress levels lower, discipline problems decrease and language arts scores increase when teachers aren’t shouting across the room. Laguna’s schools currently use Lightspeed Technologies’ Topcat audio system, a setup that would amplify sound from the ceiling. Some classes are also trying a Catchbox, a mic in a box students and teachers can toss around and speak into.

Flexible spaces was key, Morrison said. Instead of the rank-and-file spaces they had before, new rooms became modular with technology carts and bookshelves on wheels. This way, spaces would change depending on need — a library, a lab or group working environment. Popular at the district are new charging lockers to support Bring Your Own Device environments. Students can use a push code lock to access a locker with outlets, keep their devices inside charging and come back to retrieve them while at sports practices or in between classes.

Laguna Unified educators also made non-tech upgrades to improve the learning environment. They cleaned out classroom clutter, including visual distractions on the walls. Morrison points to a Carnegie Mellon study that found that too many things on walls can result in lower test scores. After freeing up more space, they were able to turn file cabinets into benches and learning spaces.

While new classrooms and technology can be exciting, one concern educators express and hear over and over again is, how do they come up with the money to support all this?

Most technology leaders at schools don’t control finances, but a few have arrived at creative solutions. One of the problems with funding technology is that our funding structures don’t support the progress of tech in schools, argues Randy Phelps, CTO of East Side Union High School District for about four years. Educators should think about how to maximize dollars for student needs.

To Phelps, the problem with using municipal bonds to purchase tech is that they are usually one-time monies over 30 years. It’s not a long-term solution, because districts would buy the technology, only to scramble for money when the devices need replacing a few years later. Critics say schools end up paying off costs for technologies even after they become useless. It’s like paying off a car you only drove for five years, Phelps adds.

Instead, Phelps and his team planned for about two years for a technology bond of about $130 million over 14 years. East Side Union became one of the first districts to do a technology bond, and voters passed it at 77 percent. They formed a committee to fundraise about $50,000 before the bond went up for election.

Besides acquiring technologies, they wanted to allocate money not toward salaries but for training purposes, consultation and software. In rolling out 1:1, Phelps decided to open it up for teachers to apply for what devices they wanted. The department would then award the devices accordingly, to make sure they weren’t forcing certain devices on people who don’t want them. It doesn’t work if “everyone gets the same thing,” Phelps says.

One of the first priorities for Phelps when he started was creating an identity management system for his schools. With this, students can sign on to devices and systems through one login. He also worked to extend internet access beyond school borders, providing free internet access in poorer neighborhoods where some students may not have internet at home.

Looking back at the last four years, Phelps has been able to create an environment where teachers and students can walk up to copiers with their IDs and print what they need (next year he might try QR codes to make it even quicker), everyone can access campus wireless internet, training for 700 staff, digital safety cameras on campus and deploy some 24,000 devices.

Next year, the district will approach its first round of replacing technology for teachers and students, and in the next year Phelps will be focusing on replacing the rest of their old technology, like projectors, and setting up devices that go home with students. 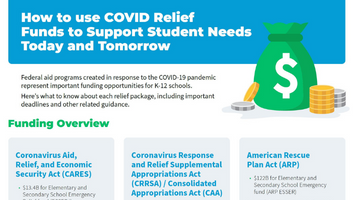 Review this infographic for quick tips to protect your Lightspeed system over the summer.
Read More 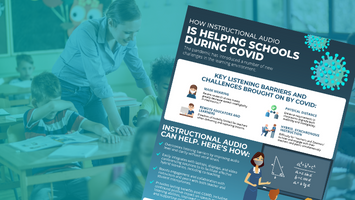 How Instructional Audio Is Helping Schools During COVID

Learn the key listening barriers brought on by COVID-19 and how instructional audio can help.
Read More
See All